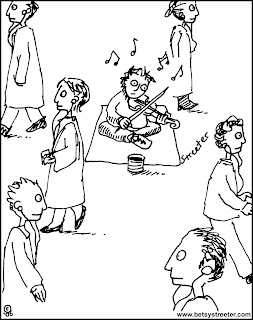 I get a rash when people don't want to pay for content.

See, you already are paying for content - you're just paying the wrong people.

With the Internet, the content is separate from the delivery. So see, you're already paying. You're paying your cable company or whoever for access. Every month.

This somehow convinces people that whatever shows up on the screen should be free. Even though cable TV programming isn't free. You have to subscribe to channels. And pay for them.

This gives me a rash.

So here's the deal - the Internet is a great place to build awareness, and yes, to get lots of information. And transact business, which, by the way, people pay for. Amazon doesn't just send you books for free. You pay for them.

But when someone uses their hard-earned time and talents to make something you like, it is worth something.

So since there aren't any great micro-payment models out there yet, at least in the West, here's a suggestion: If you like something, tell people. Put it in your blog. Put it in Twitter. Put it in your Facebook page. Those links grow exponentially. Oh, and there's this low-tech version of that also, which is word of mouth. It's really neat too. So, as Alan Hamill once said, "Tell a friend."

Really. Because to people who make content, that word of mouth is like gold. That's how you build an audience and get noticed and yes, begin to sell things. And make a living.

So if you like something, say something. You can tell people about it over your smart phone, the one that costs lots of dough each month to keep working.